Biden sends greetings to Buddhists across the world on Vesak

US Special Coordinator for Tibetan Issues Uzra Zeya to visit India, Nepal from May 17-22

Power stations supply electrical consumers independently of the power grid. Thanks to various connection options including 230 V socket, 12 V output, USB ports and a high continuous output, the devices are ideal for leisure, work and as an emergency power supply. The internal batteries can be charged either via the power pack, via a 12 V socket in the vehicle or with the help of a photovoltaic panel. The devices offer maximum flexibility.

This individual test is about a power station from the manufacturer Flashfish in the middle performance segment. In addition to two sockets with up to 500 W and a capacity of 540 Wh, it was also attractive at the time of the test 477 euros reduced price. The test device was made available to us by Geekmaxi for the test.

design and scope of delivery

The Powerstation A501 is housed in an anthracite-orange plastic housing with an attached handle. However, this is not foldable and so it is unfortunately not possible to put other things on it. We also find a similar design on other models from Flashfish, Revolt or Xmund. With a weight of 6.4 kg and dimensions of 33 × 20 × 24 cm, the power storage is still mobile, but actually too big for a backpack. Overall, the model is very stable. It’s a pity that all connections are open and not protected against dirt. 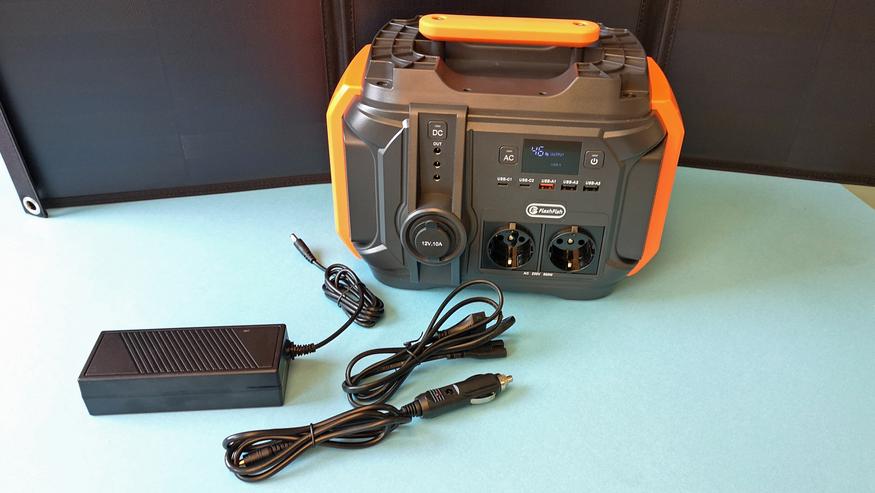 The power button for the DC outputs is on the left on the front and three circular sockets for 12 V consumers (maximum 10 A) are underneath. The 12 V car socket is at the bottom (cigarette lighter maximum 10 A). On the right side are the power button for direct current, the status display and the main power switch. The five USB sockets are installed directly below. In addition to two USB-C sockets with a maximum of 60 W, three USB-A slots with 2 A are also available. Below the USB ports are the two Schuko sockets for 230 V consumers. These provide a maximum of 500 W pure sine wave. Unlike the Revolt power station, for example, sensitive technology can also be connected here.

A large emergency lamp with a switch is located on the back. The power-in connection for the power pack or solar panel can be found on the left side of the case below the fan opening.

In addition to the power station, the 100 W power pack and a 12 V car plug, a quick start guide is also included in the scope of delivery. A solar panel is not included, for the test we used a suitable universal panel from iMars (100 W). The Li-Ion batteries used in the A501 are slightly lighter than comparable LiFePO4 batteries. The disadvantage is the significantly shorter service life of only about 500 to 800 charging cycles – that’s comparatively little. LiFePO4 batteries, as in the Bluetti EB70 (test report), retain 80 percent usable capacity even after over 3000 cycles.

Operating the Flashfish power station is easy and self-explanatory thanks to the labeling and clear layout. To switch the power station and the respective outputs on and off, it is sufficient to press the corresponding power button for several seconds. The same applies to activating and switching through the light modes of the side LEDs.

After switching on, the small status display lights up. Thanks to the good contrast and sufficient brightness, this can also be read outdoors. Unfortunately, the information content of the display is comparatively low. It shows the percentage of remaining capacity, which ports are on (DC and AC), and whether power is being output or charged. Remaining time display or performance are not visible.

Before fully charging, we test the maximum performance of the A501. To do this, we plug in various consumers, such as tools, computers or kitchen appliances. The power station delivers the specified 500 W. Short peaks of up to 1000 W are also possible. But only for a few seconds, then the power station switches off the 230 V outputs. The buffer is sufficient for the increased starting current (750 W) of our PC workstation. Since the 230 V is emitted as a pure sine wave, the power supply for our sensitive laser printer also works.

However, the Flashfish A501 lacks the power for electric grills, kettles, toasters, fan heaters or circular table saws. The sometimes more than 2000 W lead to the immediate switching off of the power outputs. However, the power station is well suited for moderate consumers such as chargers, drills, jigsaws or our lawn trimmer.

Now let’s talk about volume. When the power output is below 200 W, the internal fans of the power station remain silent and only a minimal electrical whirring is audible. At more than 200 W, the fans switch on regularly and clearly audibly. The ventilation is also not active during the charging process. Overall, the noise development is therefore completely within limits.

After the performance tests, we charge the empty 540 Wh Li-Ion batteries with the included 100 W power adapter. The charging time of around six and a half hours is long, but ultimately average. If you want a quick charge function, you should take a look at the Ecoflow River (test report), Ecoflow Delta (test report) and Anker 757 (test report) – they only take around one and a half hours, despite the sometimes significantly higher capacity.

We then check how much power we can draw from the batteries. Depending on the consumers connected, we draw between 442 and 471 Wh from the A501 in five different runs. In the best case, this corresponds to a loss of almost twelve percent in terms of capacity. In the worst case, about 18 percent is lost. A common value. In general, one speaks of a usable capacity of around 85 percent. How high the conversion loss is in practice always depends on the connected consumers. The lowest losses occur when using 12 V devices on the DC outputs. Experience has shown that the most is lost when using low-performance 230 V consumers. The power station supplies our PC workstation with a notebook, two monitors, a printer, a telephone and additional consumers (a total of around 120 W) for around four hours.

The tests with the universal 100 W solar panel SP100 from iMars are also successful. In good weather conditions, we still need almost eight hours to fully charge the power station.

During the tests with the solar panel, the biggest limitation of the A501 then also shows: Simultaneous charging and output of alternating current is not possible here. However, this is the only way to ensure long-term use far away from the socket. So you can charge by solar, but not at the same time supply the cool box with electricity, which significantly limits its use. A power station advertised as a solar generator should be able to do that! So far, we only know this limitation from BW-PG2 from Blitzwolf (test report) or Revolt ZX3012 (test report).

However, the design, size, capacity and performance are all right for the price. If you are only looking for a mobile socket for electronic gadgets, you will get a decent price-performance ratio here. The Flashfish A501 is ideal for supplying power to RC cars, drones, cameras or other moderate consumers on the go. The power station is also ideal for the mobile use of corded tools – as long as these do not exceed 500 W.

[ad_2]
This is Auto Posted article collected article from different sources of internet, EOS doesn’t take any responsibilities of this article. If you found something wrong in this article, please tell us.

Biden sends greetings to Buddhists across the world on Vesak

US Special Coordinator for Tibetan Issues Uzra Zeya to visit India, Nepal from May 17-22

Odisha Sports to face PIFA Sports in next IWL match

To prepare! This is the schedule of marathons in La Plata until the end of the year

Get rid of spider webs with these tips

No Result
View All Result

© 2022 East of Seattle - Your Information. Our Responsibility.